... even if you're a complete beginner

Start Your NEW Piano Journey
Back to Blog

In this article, I’d like to introduce you to a sheet music app by a leading classical sheet music publisher. Henle editions need no introduction for classical musicians. Recognizable everywhere by their dark blue covers, these “Urtext” editions are respected worldwide for the highest standards of scholarship and typesetting.

Each Henle edition is the result of months and sometimes even years of research by respected musicologists. Moreover, the scores are among the most easily readable due to the beautiful typesetting, which requires considerable engraving by hand.

The primary goal for the digital editions was to preserve the accuracy and legibility for which Henle editions are famous. To that end, Henle has duplicated the exact editions in digital form for both iOS and Android tablets. This approach has numerous advantages:

The scores are identical to the print editions. Not only the notes and expressive marks identical, but the digital scores duplicate the actual engraving. This means that they still use some of the most beautiful and readable fonts for both musical symbols and text. The digital scores also preserve the layout, meaning that each system (line of music) is identical to the print versions.

Henle also took pains to ensure that the digital editions are highly usable even on smaller screen devices such as the 9.7" iPad models. One thing that makes that possible is landscape mode.

The app also works equally well in portrait and landscape mode. Better still, it saves individual layouts for each mode, so you can have different preferences for margins and spacing in each screen orientation for each score. This is the “killer feature” that makes the app truly usable on smaller screens (such as the 9.7" iPad). In landscape mode, a smaller device can become a practical substitute for paper.

By default, the exact text of the print edition will be displayed when your tablet is in portrait mode. This is fine on large tablets such as the 12.9" iPad Pro, but on smaller screens it’s too small to read and there’s far too much white space.

The app therefore makes it possible to adjust the size of the score in two ways. First, you can change the page margins, reducing the white space to nearly zero.

You can also change the spacing between staves.

I generally like to make the music as large as possible while also trying to minimize page turns. I discovered a little trick for doing so. First, tap the Score Settings icon in the upper right. Then choose “Custom Layout.” From there, tap “Stave Spacing,” where you’ll then find two sliders. The first is for the margins and the second is for spacing. I like to start with both sliders all the way to the left. Then I slowly move the top slider to the right until an extra dot appears at the bottom of the page. (The dots represent the pages in the score.) I then move the slider back just enough for the dot to disappear. 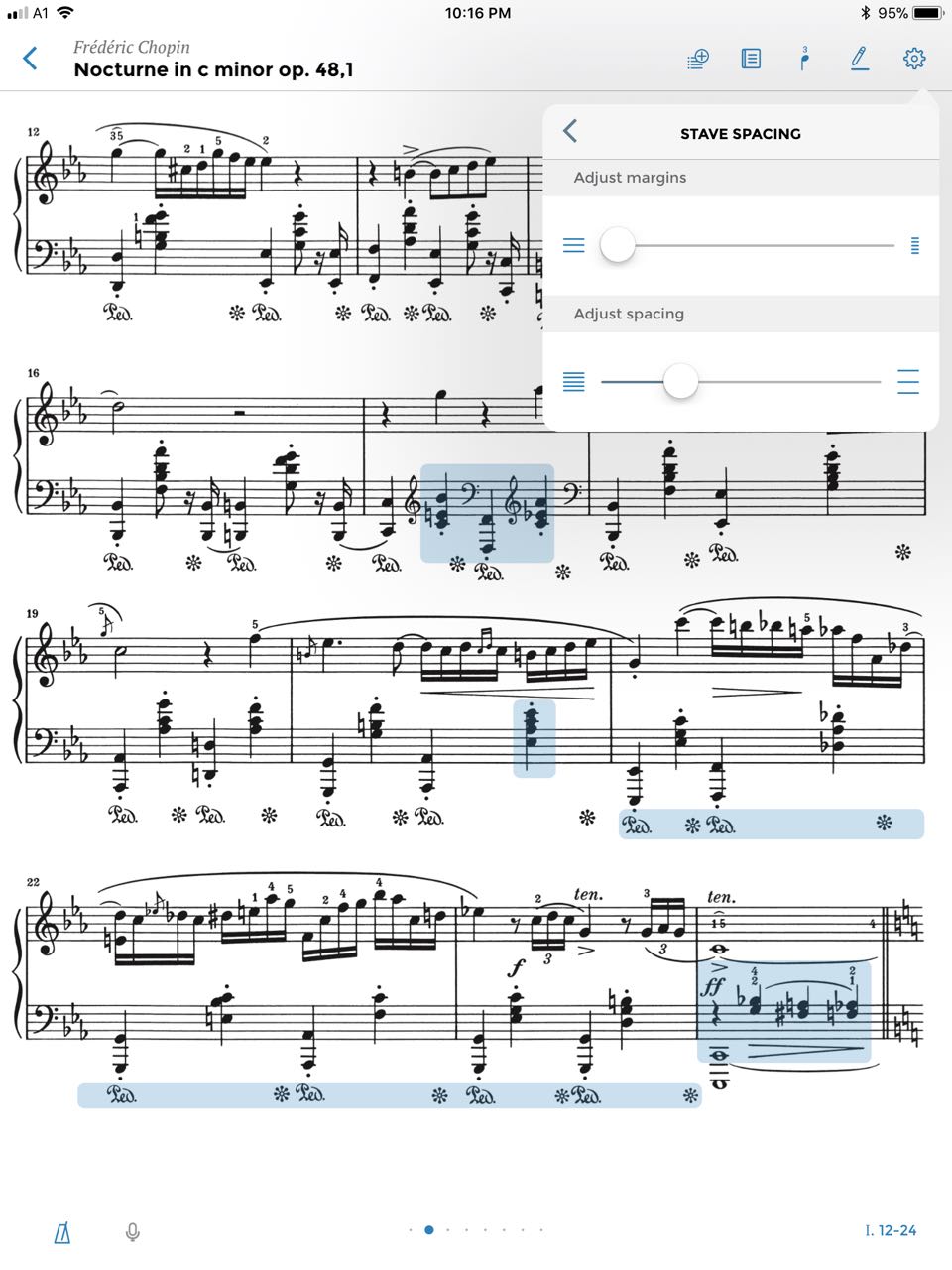 Then I do the same with the second slider. I adjust the spacing between the staves until an extra dot appears, then move the slider to the left until it disappears. This trick will give you the largest music notation and the widest space between staves while simultaneously minimizing page turns. You can always play around with individual settings and adjust each score to your liking, though I find this to be a good starting point.

Critical notes integrated into the score

One of my favorite features is that critical notes are integrated directly into the score. Publishers of Urtext editions maintain a list of critical notes for each work they edit. Very often the sources conflict: The composer’s manuscript often differs from the first edition, or, say, the first French edition has different dynamics or articulations compared to the German edition. Sometimes there are mistakes in the manuscript that got corrected in the first edition. Other times it is the publisher of the first edition who misread the manuscript and introduced mistakes. It can be a very difficult task to ascertain which version is correct. This is why musicians need to rely on skilled musicologists who scrupulously sort through all available sources, from first drafts to the composer’s autograph to copyist’s manuscripts to the first editions. It’s typically a daunting task that takes inordinate amounts of time.

Due to the practical necessity of writing most critical notes at the end of a volume, many players never end up reading them. (Henle actually publishes only the most significant variants in the critical notes that accompany each edition. Not well-known is that the full notes, detailing every discrepancy, are available as a separate volume for some works.) 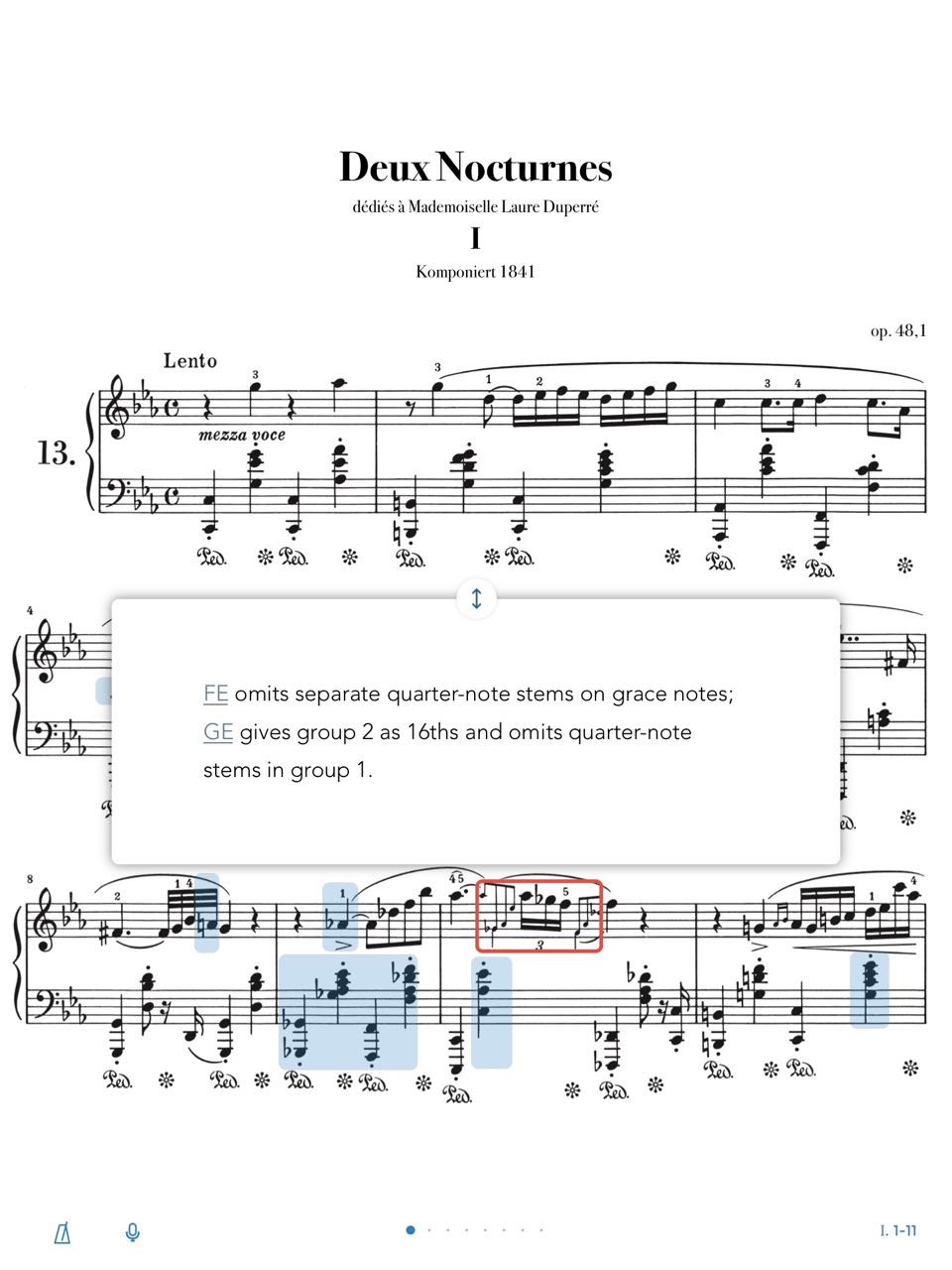 The new app solves this issue by integrating the critical notes directly into the score. Score comments are turned off by default, though you can easily switch them on by tapping the Companion Content icon and selecting “Score comments.” You’ll then see any section of music with comments appear with a blue background. Tap any blue section and the relevant comment will pop up. You can often even tap a blue link in the comments to bring up details of any sources mentioned. To me, the integration of comments is among the most valuable features of the app. Thanks to this feature, I’m sure many musicians will come to better understand the music they play.

Some scores have many more editorial comments than others. The new edition of the Liszt Sonata, for instance, is filled with notes detailing many discrepancies and solving numerous issues.

Tip: Henle makes their critical notes available for free download on their website. You can look up any score in their catalog and see which ones have a lot of notes. To me, these are some of the most valuable scores to have in digital format.

You can add fingerings (and other symbols) quite easily. To do so, tap and hold a system to enter annotation mode. At the bottom of the screen you’ll find a row of music symbols. Simply drag any symbol to the score. 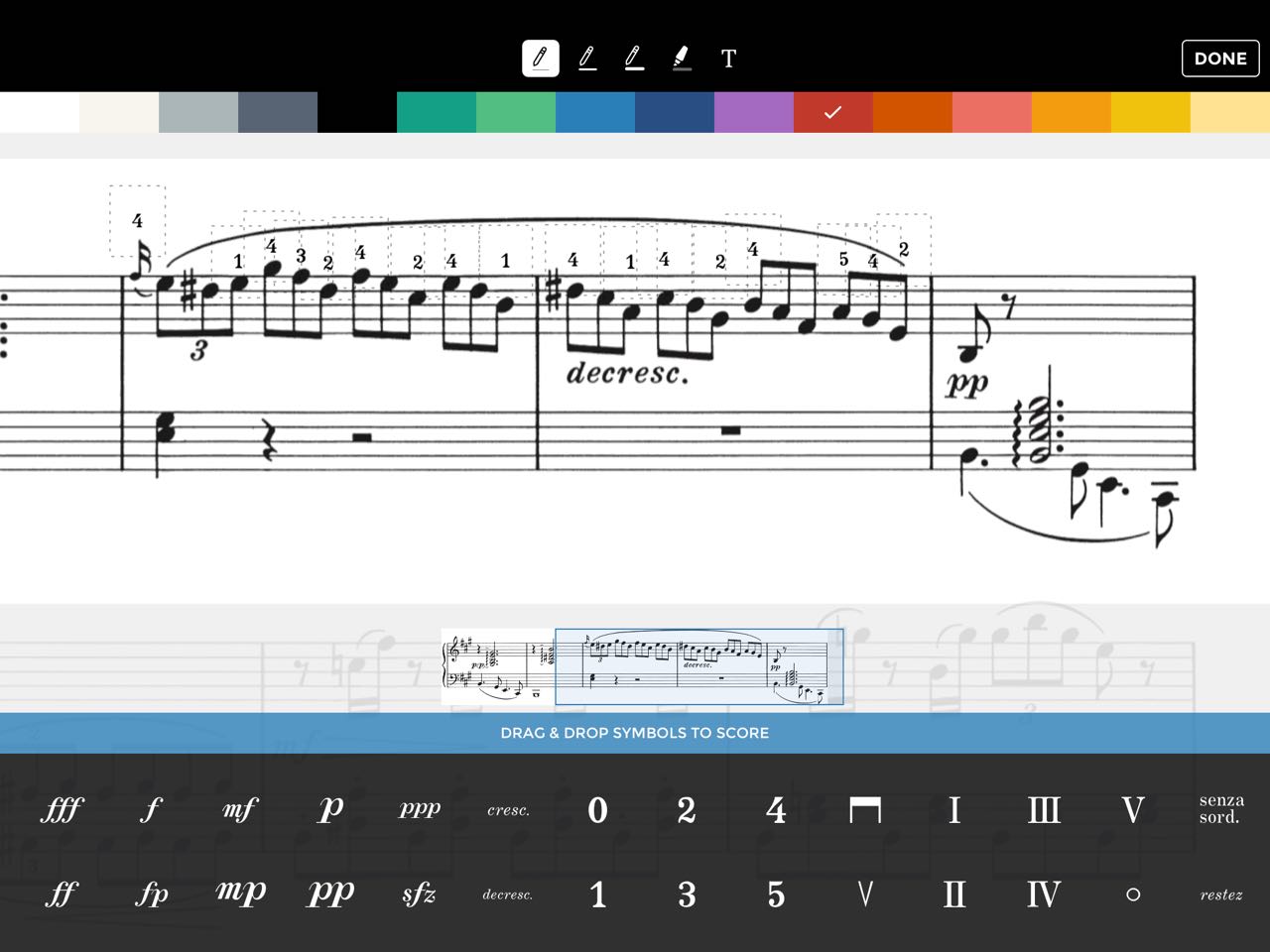 The app is also compatible with Bluetooth page turners. It worked immediately with my AirTurn Ped, no setup necessary. (This is much better than forScore, since using the AirTurn in the recommended mode requires entering the settings and connecting manually each time.)

Generally I like this combination, except when I happen to glance down at the keyboard when turning a page. It’s not always immediately obvious that I turned the page since I don’t see a page turn animation in my peripheral vision. Still, I prefer no animation to a distracting one.

An under-appreciated yet significant feature of digital editions is automatic updates that would be impossible for print editions. A little-known fact about Henle editions is that they are regularly revised as new sources are identified and existing sources reevaluated. In fact, at the very back of the print editions, you’ll find a letter below the final bar line. This letter shows the revision. If you purchased a printed Henle edition years ago, it’s likely to have been updated. The letters proceed alphabetically, so you can see how many revisions were published between your edition and the latest one.

A really useful feature is PDF export. To export a PDF file (at least in iOS), tap the settings icon in the upper right, then select “Print.” You can then pinch open the print preview to see it in full screen mode. Select the share button to open the PDF file in another app or even share it using AirDrop on iOS.

The Henle digital scores are, alas, quite expensive, though they’re still much cheaper than the same print editions—about half price if you buy a lot of credits at once. If you already own the print editions and want to switch to digital, it will require a significant investment.

Buy one score at a time

The price of a collection is reduced if you already own works within that collection. Thus, if you already purchased, say, two or three Mozart sonatas and later wanted to buy the whole set, you’ll automatically be credited for the sonatas already in your library.

Adding fingerings using the designated method of dragging symbols looks much neater, but it’s also much slower than writing.

I also found the Apple Pencil to be slow to react with this app sometimes. This isn’t the case with many other apps, so I assume it’s a software issue that can be fixed.

Strangely, some of the most used symbols are missing, such as crescendo and decrescendo wedges and slurs. This must be because these symbols vary in length. I’m sure this must be on the drawing board for the app developers.

A few small suggestions occurred to me while using the Henle Library app. I could imagine using the pinch gesture to change the size of the score; this would obviate digging into the score settings.

Multi-select would also be useful for, say, changing the color of many fingerings at once.

The Henle Library has quickly become my favorite app on the iPad, and not just my favorite music app. I find it far superior to downloading scanned public domain scores in PDF format, given the quality of Henle’s scores and how well they made their app work on smaller screens. For professional classical musicians and music students, it’s indispensable and really worthy of the highest recommendation.

We will never sell your information, for any reason.

Albert Frantz learned piano as an adult. Now a Bösendorfer Artist based in Vienna, his debut album was an official jury nomination for the German Record Critics' Award. As an international keynote speaker, Albert has presented frequently at TEDx conferences and spoken on children's rights at the United Nations. In his spare time he has trained with Formula One drivers and completed Ironman triathlons. Albert's unique story was the subject of a documentary and he was the cover story for Toastmaster Magazine in 142 countries.